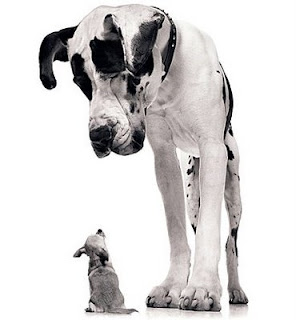 Advantages
"one great advantage of scale taught in all of the business schools of the world is cost reductions along the so-called experience curve. Just doing something complicated in more and more volume enables human beings, who are trying to improve and are motivated by the incentives of capitalism, to do it more and more efficiently. [...] scale allow greater specialization within the firm. Therefore, each person can be better at what he does.

[...] When TV advertising first arrived, when talking color pictures first came into our living rooms, it was an unbelievably powerful thing. And in the early days, we had three networks that had whatever it was say 90% of the audience. Well, if you were Proctor & Gamble, you could afford to use this new method of advertising. You could afford the very expensive cost of network television because you were selling so many cans and bottles. Some little guy couldn't. And there was no way of buying it in part. Therefore, he couldn't use it. In effect, if you didn't have a big volume, you couldn't use network TV advertising which was the most effective technique.

[...] And your advantage of scale can be an informational advantage. If I go to some remote place, I may see Wrigley chewing gum alongside Glotz's chewing gum. Well, I know that Wrigley is a satisfactory product, whereas I don't know anything about Glotz's. So if one is 40 cents and the other is 30 cents, am I going to take something I don't know and put it in my mouth which is a pretty personal place, after all for a lousy dime?"

Disadvantages
"And there are also disadvantages of scale. [...] we had trade publications there that got murdered where our competitors beat us. And the way they beat us was by going to a narrower specialization. [...] occasionally, scaling down and intensifying gives you the big advantage. Bigger is not always better.

[...] The constant curse of scale is that it leads to big, dumb bureaucracy ‑ which, of course, reaches its highest and worst form in government where the incentives are really awful. Sears had layers and layers of people it didn't need. It was very bureaucratic. It was slow to think. And there was an established way of thinking. If you poked your head up with a new thought, the system kind of turned against you."